Today is a day that will mark a milestone in the history of the Spanish-speaking community in Star Atlas.

In Spain’s evening hours, the Quimera guild made the presentation of its first NFT collection leaving the attendees amazed and more than one of them wanting a little bit more.

The invitation to this event states the following:

“Introducing ORIGEN, the first NFT collection of Quimera. It will consist of 3 distinctive designs based on the beginnings of our Lore, where the literary origins of Chimera are told. They will have 3 different rarities, with different Supply based on their exclusivity and later we will talk about their utilities. On Sunday August 7th at 18:00H UTC you have an appointment on Chimera’s YouTube channel. Supnes! “

Throughout the event they have given an interesting repertoire of content, they started by clarifying that they have no intention of having short-term profits, but rather, it is about building together with the community, starting with this release. In addition, the proceeds will be kept at the disposal of the guild to continue building together, considering that it is fair to say that this collection is to support it and all funds will go to the treasury of Chimera.

Another critical point is that the release dates of the NFTs have not yet been determined, and they have not announced the platform where they will be available for purchase. But something that still has value, and has left us intrigued, is that they announced that October is the guild’s birthday and emphasized that soon there will be announcements about it.

Moving on to the important part of this evening, the three types of NFT rarity were presented: Common, Rare, and Legendary. The qualities shared by the three types are: Whitelist Chimera token, Whitelist NFT’s future, Role in discord. Regarding the Common rarity, it has a supply of 600, with a value of ~60 dollars in Solana. It is followed by the Rare with a supply of 120, costing between 100 and 120 dollars, access to “Private 1” of the Chimera token, royalty percentage of sales, and priority access to our assets and T-shirts. And finally, the Legendary with a supply of 30, valued at ~250 dollars, priority access to our assets, private group (foundation room) and hoodies.

In addition, the Vice President explained the significance of the Chimera, claiming that it is a unique being of its own, “Chimeras are large winged felines that can be found in a few sectors of the galaxy. It is believed that they originate from Zenobia and that from there they were exported to other rocky planets. They can be found both in the wild and in a state of domestication and are the object of veneration in some cultures” and that they will have a transcendental role in the lore.

As a way of closing the event, a video was played in which a phrase stands out, I quote, “The greater the darkness, the brighter a beam of light shines.”

“(..) we offered 20 of the Legendary NFTs to the community and they sold like hotcakes”, there are only ten left for public sale.

This event has set the tone for the work being done behind the scenes and the coordination with which they are working for the growth of this guild both within the Hispanic community and within the metaverse that is getting closer and closer.

Definitely Quimera is steadily approaching the gates of the Star Atlas metaverse. 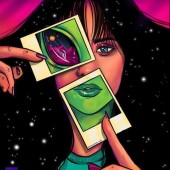 The Bounty Board – 🇪🇸

The Emergence of Star Atlas and the Metaverse